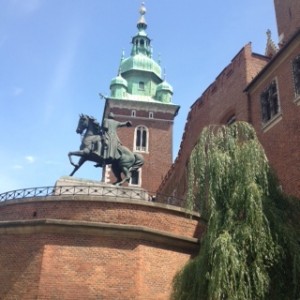 As recently as two weeks ago I have returned from the 10 day trip to Poland and mainly old City of Krakow.    The flight from San Francisco to Krakow via German metropolis of Frankfurt was uneventful.  I must say that our security services work really well and protect us during our visits to exciting places.  The airlines performed their service really well and always giving this sense of confidence-our pilots are the best  But lets get back to the visit:

Why Krakow?  Well it is first of all the city of my birth and education.  Secondly  it is an ancient, full of history, beautiful place to see.   Since it has been a Capital of Poland for several Centuries – until King Vasa in 17th Century changed his capitol city to Warsaw – it remained a treasure for  Poles and European visitors for ages.

Luckily this magnificent City has remained intact during the Second World War.   However its beauty dimmed a bit and lost some luster during post war Communist occupation and tyranny.  During that time many monuments deteriorated, not cared for because it was not a priority for the thuggish regime ruling post World War Poland and same went for their masters in Moscow.

But now for over 20 years, after fall of Communism, prosperity and freedom is reigning everywhere.  People are happy.  You can see how optimistic and exciting this Old City has become once again.   I would have never thought possible to see Coca Cola signs and local businesses advertising their services to public even in the “Old Town”.  And yes, a note to Architects, these advertising plaques, lights etc are very tastefully integrated into centuries old buildings. Something to learn and kudos to importance of context in design. But what everybody has to see is the Old Kings Castle with its Gothic Cathedral adorned here and there by later Renaissance and Baroque style additions.    What a wonderful building collection it is.  Showing that mixing of styles can work, so we should not be preoccupied about adding to older buildings a more modern parts.  It is okay.  Context is important but copying stuff is vulgar.  I believe that Old Masters knew best how to design in context with new styles.

Strolling this majestic complex with splendid views of the  Vistula river, allowed to imagine how former occupants of the Castle looked at the area around the City, what they thought and what they dreamt about, but have they ever imagined bustling modern life, fast paced traffic and ever growing modern structures  all over the place particularly on the other side of the river.

To enter the castle usually takes you via a slightly inclined road, through a gate with a monument of a hero to two nations, Poland and the USA.   General Tadeusz Kosciuszko (Tadeas Koshchushko).  He fortified many redoubts and forts during the Revolutionary War for American Independence since 1776.  He was  the best General Washington’s Army Engineer and a good friend of General Gates. West Point fortifications are his masterpiece as well.  He became US Citizen but after American Independence was won he returned to his native Poland to fight its conquest by Russian Empire.  Unfortunately his army was defeated in 1795.  Never-less he has his place in both nation’s hearts.  He did believe as we do in the Individual Liberty for all.  Strolling forward along defense walls you enter a small courtyard in front of the Cathedral and the Cardinal’s living quarters. Same quarters where Cardinal Wojtyla lived, later to become Pope John Paul II.   Inside the majestic atmosphere of the Catherdarl you can see sculpted tombs of Poland’s Kings and Queens.

From that place you usher into a big courtyard surrounded by porticos and King’s living quarters. You do have to see the place and to fully appreciate it,  its spectacular beauty designed by best Italian Architects.     After all that country for centuries till this day is a bastion of Western Civilization against ever present enemies from the east.

But nowadays the feeling is optimistic, people stroll around the Palace  enjoying the history, artifacts and an ice cream.

People from all over the world visit the Castle it is really a treasure for the world, and the exprosotion shows how sophisticated tastes the monarchs had  what sort of art form they accumulated through the centuries.

In the architecture you see growth of the buildings in different times, where stone structure seems finished in Brick.   That is how the time deteriorated buildings would come alive again with newer additions or repairs.  Best example of Adaptive Reuse and Remodel I would think……  So as you can see the Kings and Queens also did Remodels and Additions same as we do them now.,

With the 8 tips in this guide, you will discover how to find the right architect for your design and for your budget.